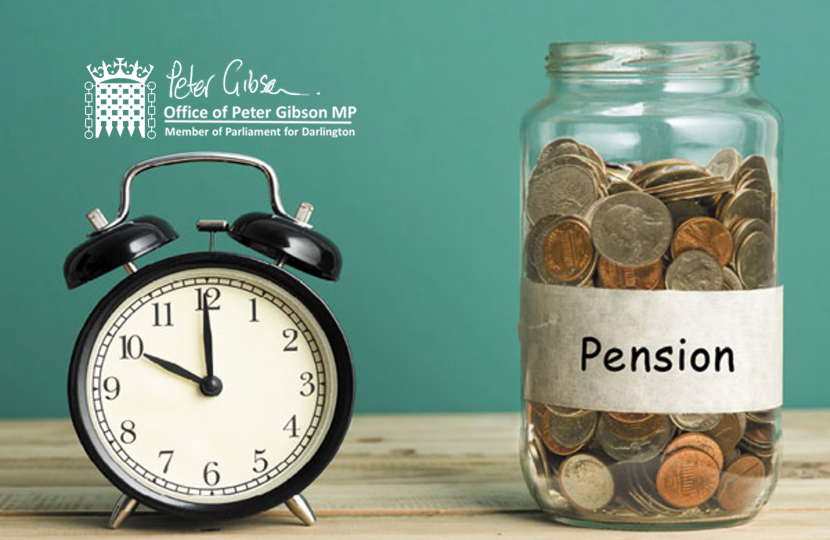 Peter Gibson MP has welcomed new figures showing that 26,000 employees across Darlington have been automatically enrolled into a workplace pension with 1,820 employers.

More than 10 million employees are now participating in an automatic enrolment workplace pension – meaning there are a record-breaking number of pension savers.

Peter Gibson MP has welcomed new figures that show 26,000 Darlington constituents have been automatically enrolled into a workplace pension – delivering on the Conservative Government’s priority to build a more inclusive savings culture.

Overall, participation in workplace pensions has risen from 42 per cent in 2012 to 86 per cent in 2020 – thanks to work that has been carried out by successive Conservative governments.

Prior to the introduction of Automatic Enrolment in 2012, the number of employees participating in workplace pensions was 10.7 million, representing just 55 per cent of those eligible. By 2020, 19.4 million employees were participating in a workplace pension, representing 88 per cent of those eligible – an increase of 33 per cent.

Employers have also played a major role in supporting Automatic Enrolment, increasing their contributions in 2019 to ensure savers put away contributions worth 8% of their pay.

These figures mean that total annual savings for eligible savers increased to £105.9 billion in 2020, a real-terms increase of 37 per cent compared to 2012.

Thanks to Automatic Enrolment, an overwhelming majority of eligible workers are now saving an asset for their future.

Peter Gibson MP said: “We know that strong financial security later in life is vital and we should do everything we can to help people with this.

That is why I am delighted that 10 years after its launch, the Automatic Enrolment scheme has helped 26,000 workers in Darlington to save for their futures by getting more people enrolled into pension schemes to take control of their future finances, and I am pleased that there are plans to go further by removing the lower earning limit.

Minister for Pensions, Guy Opperman, said: “Automatic enrolment has truly revolutionised pension saving in the UK. More than 10 million people have been enrolled into a workplace pension, with an additional £28.4 billion per year being saved since 2012.

“The retirement saving habit is sticking: the overwhelming majority of eligible employees are now enrolled in a workplace pension and our ambitions for the future of Automatic Enrolment will help people save more and start saving earlier.

“From expanding Automatic Enrolment and cracking down on pension scams to continuing our work to deliver revolutionary pension dashboards, we’re committed to providing savers with the support and services they need to enjoy the best retirement possible.”