Darlington MP Continues to Push For Work on Railway Bridges 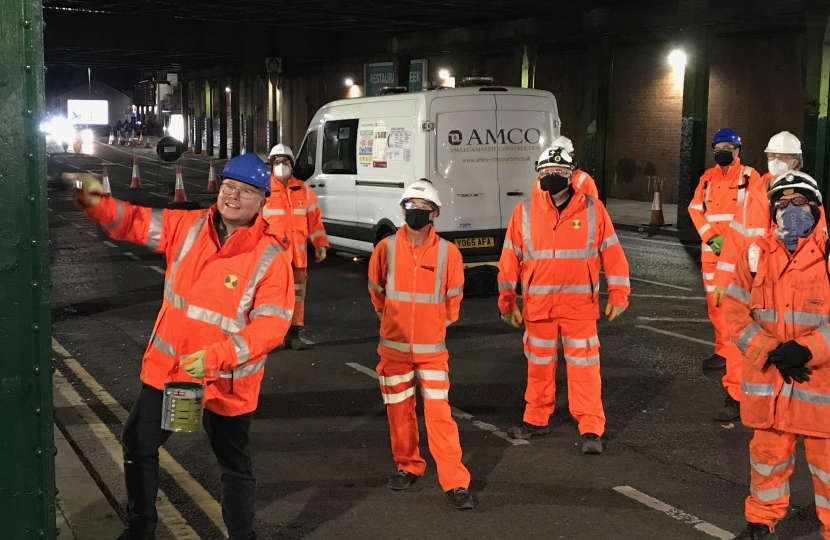 Peter Gibson MP is continuing in his quest to tidy up Darlington. Peter has been working with Network Rail to facilitate the restoration of three key railway bridges in Darlington.

Following a request from Peter Gibson, Network Rail is working in partnership with Darlington Borough Council to brighten up three historic railway bridges in the town, as part of a £60,000 project.

Improvement work on two bridges on Yarm Road was completed late in 2020 and planning for restoration work for the bridge on North Road is now underway. Network Rail workers will restore and repaint the bridge, and carry out minor repair work, whilst protecting it’s heritage. A decision is due to be made soon on what colour to repaint the Grade II listed bridge on North Road.

The bridges have been painted in keeping with local heritage and the notable features and crests on the bridges can still be recognised. This project represents an investment of £60,000 on behalf of Network Rail.

Commenting, Peter Gibson said: “Due to the impending investment in our train station it is important that those visiting Darlington are greeted with an aesthetically pleasing route into our town.

“Network Rail have been extremely responsive in ensuring the work can be done on the bridges to brighten up our town. It was great to meet their team on site last year to see first-hand the work being done to restore the bridges, including to highlight the town’s Coat of Arms on the bridges which feature Locomotion No. 1.”

Route Director for the East Coast, Network Rail, Paul Rutter said: “This investment will brighten up Darlington, with the work on these three bridges improving the appearance of key gateways into the town for the benefit of both the local community and visitors to the area.

“We work hard to maintain bridges across our network. This work will make sure the appearance of key structures in Darlington is better, and that it reflects the historic place the town has on our railways.”

Leader of Darlington Borough Council. Cllr Heather Scott said: “We are pleased to work with Network Rail on this project and with the work planned for Banktop Station and the 2025 celebrations this is a great start to reinforce the importance of trains to Darlington.”

MP Welcomes News that the Treasury is Coming to Darlington

Following the Budget announcement today Peter Gibson, Member of Parliament for Darlington, welcomed the Chancellor’s announcement that Treasury North will be coming to Darlington.