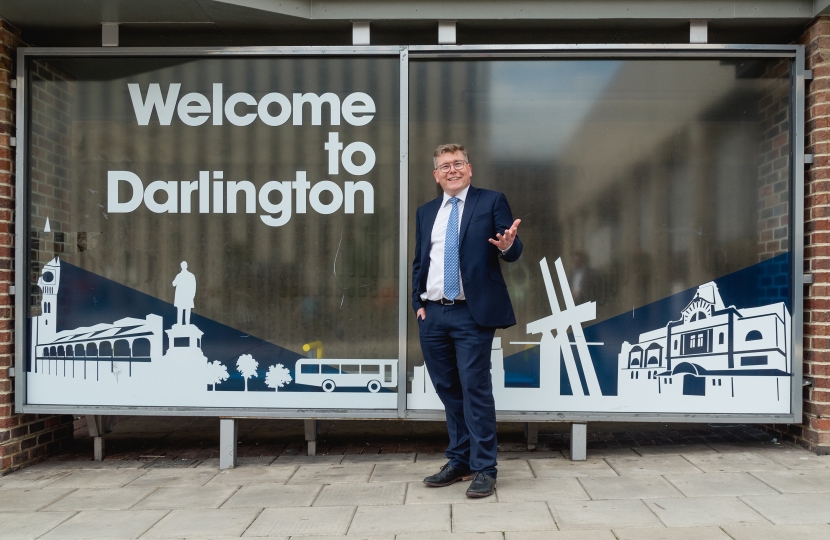 Peter Gibson MP wrote to Ministers at the Department for Transport as part of his #WhereItAllBegan campaign. This campaign calls for Darlington to be the base of the new Great British Rail (GBR) HQ.

Following a systematic review of how our railway operates, the Government committed to ending chaotic timetable changes caused by a fragmented railway system. Due to launch in 2023, GBR will bring about fundamental changes to the national railway network, which will integrate the railways for the first time in a quarter of a century.

In his letter to the Department, Mr Gibson stressed Darlington’s unique position as the birthplace of railways and the continued importance of the railways to Darlington’s identity and heritage.

With Darlington on the up, Mr Gibson pointed towards steps already being taken by the Government to bring investment and jobs to the town along with Darlington Borough Council’s plans to redevelop the town’s railway quarter ahead of the bicentenary of the Stockton and Darlington Railway.

In his response, Minister Heaton-Harris acknowledged Darlington’s deep rail heritage and the exciting opportunities being developed through the redevelopment of Bank Top station and the town centre through the Town’s Fund.

The Minister confirmed that while they are still in the early stages of the Rail Transformation Programme, a number of options will be considered for the location of GBR’s headquarters in due course.

“In Darlington we are proud of our unique connection with our railway heritage. Darlington is the birthplace of the modern railways as the location where the idea of the Stockton and Darlington railway was conceived and launched – an event commemorated on the £5 note. I firmly believe that Darlington is the ideal location of Great British Railway’s new headquarters.

“I am pleased that the Minister responsible for railways recognises Darlington’s railways heritage and the progress we have made as a town of the last 19 months.

“I am excited to work with the Department over the coming months to make the case for Darlington to be the home of Great British Railways and to bring our national railways home to where it all began.”

Peter would welcome the support of the people of Darlington to join the campaign to bring this institution and it’s jobs here, #WhereItAllBegan

The Search Is on To Find Darlington’s Spookiest Home

Peter Gibson, MP for Darlington is searching for the spookiest house in Darlington and is looking for constituents to share pictures of their decorated homes celebrating Halloween this year.