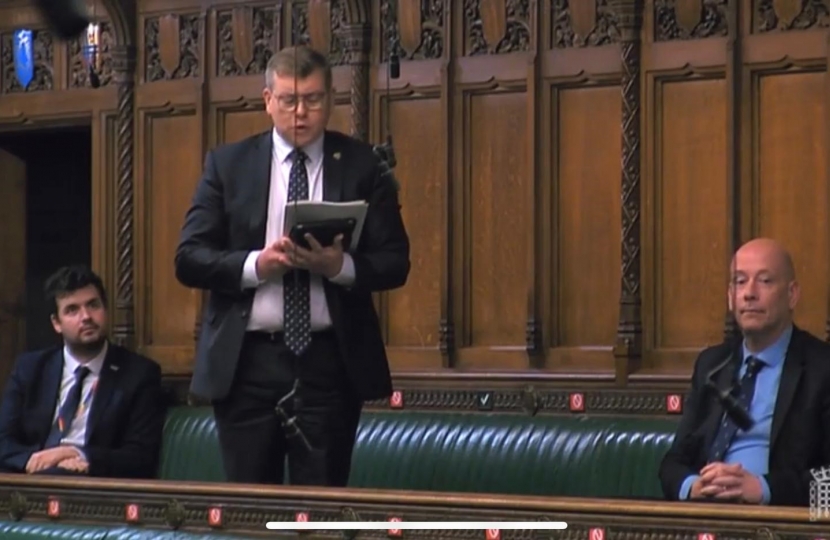 On Wednesday 24 March 2021, Darlington MP, Peter Gibson, spoke in a debate about a treatment for Phenylketonuria (PKU) – a rare genetic disorder that sadly 4 people, 1 adult and 3 children, in Darlington suffer from.

1 in 10,000 babies across the United Kingdom are born with PKU and this rare inherited disorder means that individuals cannot break down the protein phenylalanine, and if untreated can lead to damage of the brain and nervous systems.

Peter has been active in Parliament on this matter since he was elected, lobbying Ministers to reconsider treatments for PKU. Peter is also an active member of the All-Party Parliamentary Group for PKU and has sought to raise the concerns of his constituents with his Parliamentary and Ministerial colleagues.

Sadly, there are few effective treatments for this disorder meaning that those who suffer have to stick to strict diet regimes to avoid consuming the phenylalanine proteins. One treatment that is made by the firm BioMarin is Kuvan, which is widely used across the globe to treat PKU. However, the use of Kuvan is prohibitive due to the cost of procuring large quantities of the drug.

Last month, the National Institute for Health and Care Excellence (NICE), which has been consulting on allowing Kuvan to be used as treatment for PKU, published its draft report, which recommended that Kuvan be used for children only (up to the age of 18) who are afflicted with PKU.

While welcoming this news in his speech, Peter Gibson described it as a “bittersweet moment”. For while this is welcome news for children suffering from PKU it means that there will be a cliff edge in their treatment and adults afflicted by PKU will still not be able to access it.

“Although the introduction of the Kuvan treatment for children is fantastic news, I am concerned that NICE have not fully considered the problem of an 18-year-old abruptly stopping treatment. This decision will lead to further difficulties down the line and does not address the treatment of adults with PKU.”

Mr Gibson, however, remains optimistic that in their final report the NICE will reconsider its use for treating adults and as BioMarin’s exclusivity of Kuvan comes to an end, the drug will become cheaper and more cost-effective as a treatment for all who suffer from PKU.