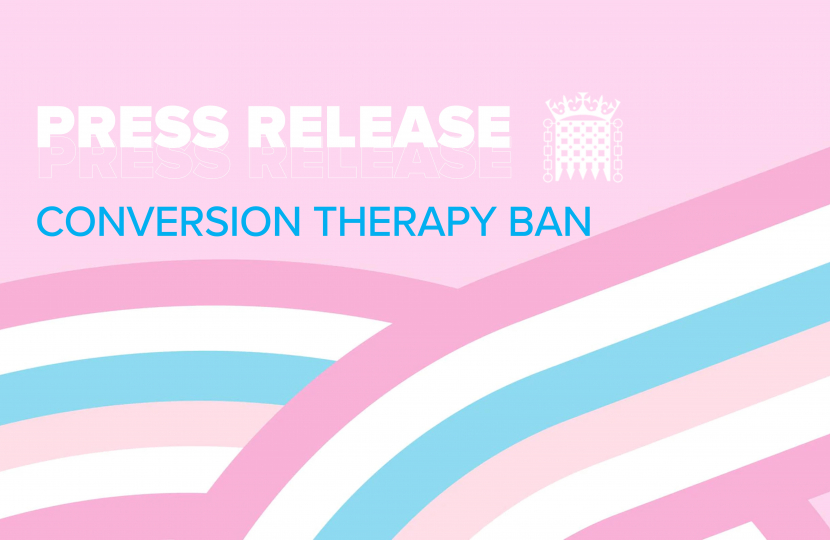 Peter Gibson MP has welcomed the news that the Government has today (17.01.23) announced that they will publish a draft Bill which will set out a proposed approach to ban conversion practices.

The Bill will apply to England and Wales and will protect everyone from these harmful practices, including those targeted on the basis of their sexuality, or being transgender.

Further, the Government Equalities’ Office commissioned a large-scale LGBTQ+ survey in 2017 which found that two per cent of respondents to the national LGBTQ+ survey said they had undergone conversion therapy in an attempt to ‘cure’ them of being LGBTQ+.

The Government have now announced that they will publish the draft Bill banning conversion therapy practices shortly and will ask for pre-legislative scrutiny by a Joint Committee before the end of this parliamentary session, which is likely to be October. Once pre-legislative scrutiny has been completed, the bill will then begin its legislative journey through both houses of Parliament.

Speaking about the announcement, Mr Gibson said “Conversion therapy is an abhorrent practice, that I consider as a form of abuse and I am proud that we have committed to banning it. I welcome the Government’s commitment today and appreciate the way Government has engaged with colleagues across the political spectrum to deliver this.”

“We now have a timetable for delivering this ban and the protections this bill will offer to some of the most vulnerable in society will be warmly welcomed by all members of the LGBTQ+ community. I now look forward to the publication of the draft bill and hope to see it swiftly pass its legislative stages to make its way onto our statute books.”

“I want to pay tribute to Alicia Kearns MP, who has led the campaign on this issue as well as many other Conservative colleagues who have been pushing for an inclusive ban on conversion therapy throughout the duration of this Parliament”

Further, Mr Gibson said “I am positive about the steps that have been made so far in the UK to achieve LGBTQ+ equality, and I am confident that this good work will continue. As a member of the LBGTQ+ community, I personally am committed to seeing all forms of abuse for LGBTQ+ people banned and will continue to work towards that in Parliament.”