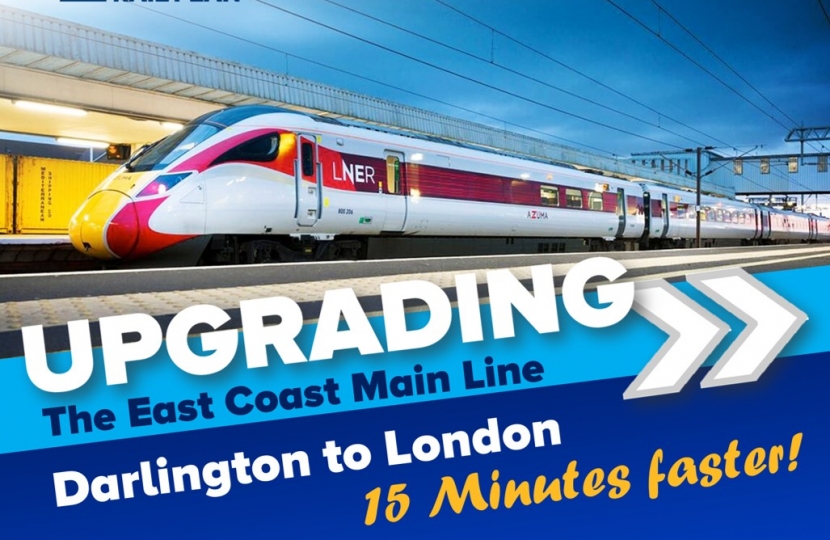 Peter Gibson MP for Darlington has welcomed the publication of the Conservative Government’s £96 billion Integrated Rail Plan for the North and Midlands, which will deliver better transport links and spread prosperity and opportunity decades sooner than previously planned, all while levelling up the country.

The North East will directly benefit from new announcements included in the plan, including a package of improvements to the East Coast Main Line – with 140mph trains and digital signalling, bringing benefits to communities far sooner than originally planned.

Smoother, more reliable electric trains will also be rolled out across Newcastle, Durham, and Darlington – delivering a better experience for passengers.

Commenting, Peter Gibson MP said “I welcome the improvements in speed and capacity across the north on top of the other benefits Darlington is benefiting from levelling up. The days of a sub 2hour journey time to London is in sight.

Prime Minister Boris Johnson said:  “My mission is to level up opportunity across our country, which is why we’re making train journeys faster and more reliable through the biggest ever public investment in our rail network.

“This is because better rail connections are essential for growing local economies and businesses, and our Integrated Rail Plan will deliver better services to more people, more quickly.

“Levelling up has to be for everyone, not just the biggest cities. That’s why we will transform transport links between our biggest cities and smaller towns, ensuring we improve both long-distance and vital local services and enabling people to move more freely across the country wherever they are.”

Transport Secretary Grant Shapps said: “Our plan is ambitious, deliverable and backed by the largest single government investment ever made in our rail network. It will deliver punctual, frequent and reliable journeys for everyone, wherever they live.

“Just as the Victorians gave this country our railways nearly 200 years ago, this Integrated Rail Plan will create a modern, expanded railway fit for today and future generations. Significant improvements will be delivered rapidly, bringing communities closer together, creating jobs and making places more attractive to business, and in doing so, rebalancing opportunity across the country.

“Our plans go above and beyond the initial ambitions of HS2 and Northern Powerhouse Rail by delivering benefits for communities no matter their size, right across the North and Midlands, up to 10 to 15 years earlier.”