A Year in Parliament 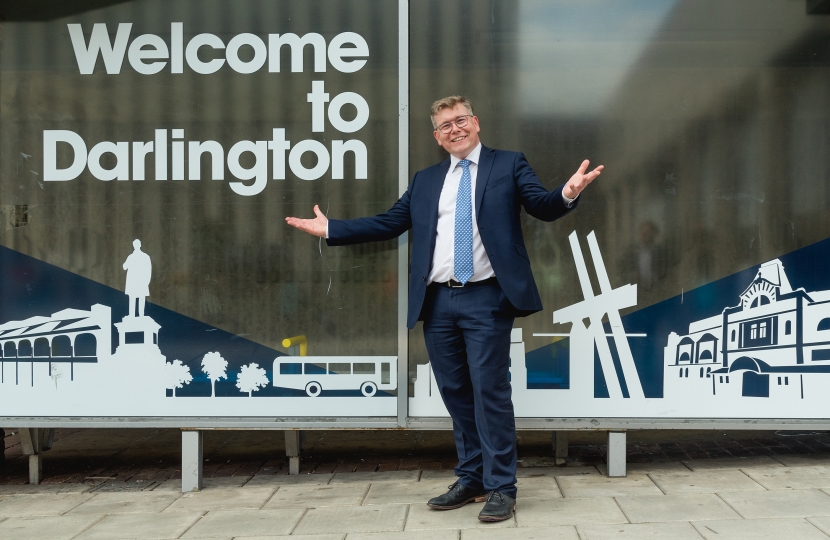 Saturday/Today marks the one-year anniversary of the historic Christmas election where Boris Johnson and the Conservatives secured a historic 80 seat majority, and where Darlington elected its first Conservative MP since 1992.

I was invited by the Northern Echo to complete a diary summarising my first week in Parliament, I then wrote a column at the six-month anniversary of my election. I’m pleased to be able to finish the year with a further piece, sharing my journey with Echo readers.

A full year of campaigning, a change in the political control of Darlington Borough Council, and the first winter General Election in living memory. 2019 was hard work, but nothing could prepare me for the challenges of 2020. Elected to “Get Brexit Done” and “Level Up”, the first having been done very early on thanks to the log jam in Parliament having been removed, and the second, an ongoing project with positive early signs for Darlington, including the investment of £100m in our train station and £23.3m of funding for our Towns Fund projects. The Covid-19 pandemic has dominated all our lives, changed much of how we have lived, and sadly seen many people lose their loved ones.

I am reliably informed that in an average year a typical MP would deal with approximately 1,500 constituent queries. Darlington constituency, covering 17 of the 20 wards of the Borough with only 64,000 voters is a relatively small seat. As I write this piece my office has dealt with almost 9,000 constituent queries over the past year. I repeatedly said through my election campaign that Darlington deserved better, and I firmly believe that in my first year as MP my team and I have provided a much stronger service to the town than had previously been experienced by the constituents of Darlington.

No sooner had I delivered my maiden speech we were in lockdown, working from home, encouraged not to attend Parliament, participating in remote voting, and sitting in the House of Commons via zoom.  All of which would have been unthinkable a year ago. Whilst many people have adapted to working-from-home, the fact one of our most ancient institutions has also done so, is quite remarkable.

Unthinkable and unprecedented are words that have been overly used throughout the past nine months. The response of the Government has been nothing short of remarkable. Ramping up testing to hundreds of thousands every day, and providing financial support to millions of people, and thousands of businesses.

As we start the rollout of a vaccine, we can begin to see light at the end of the tunnel. All of us want things to return to normal, to hug our loved ones, to go where we want when we want, and to get on with our lives without restrictions. I look forward to getting on with the parts of this job that have been restricted – meeting and visiting constituents, visiting schools and community groups, and all other face-to-face engagement. I consider this to be one of the key highlights of this job.

The people of Darlington rightly ask what has he done for us, and although I report back regularly through my Facebook page and newsletters it’s not always easy to shout about the work that goes on due to the fast paced nature of this job. Big ticket items that I can claim to have had a hand in include pressing the Chancellor for the commitment to Bank Top Station, and pushing the Secretary of State for Housing, Communities and Local Government to award Darlington the funding for the Towns Deal.  As well as big ticket items there are lots of little stories that sadly won’t make headlines but do make a big difference to people’s lives. Those people of Darlington who my team and I have helped know who they are. The man who got his tax rebate sorted, the charity that was donated some IT kit, the young men that were stranded in Bolivia and safely returned home, the lady who got her telephone connected, the man whose immigration status was resolved, the families who got their broadband, and the railway bridge that got painted, those cover just a small amount of the ways in which we have helped people this year.

I was told before I won by other MPs that this job is one of the best in the world, and in many ways it is, being able to resolve people’s problems when they have tried every possible avenue themselves is a truly great feeling knowing that I have helped in some way.

It has been a year of change; settling into a new home, adjusting to quite strange working hours, learning the ropes of a new job, meeting all my new colleagues, and navigating Parliament, both the procedure and the geography – so many corridors.

Sitting on the Women & Equalities Committee, Chairing two APPGs, and becoming a Parliamentary Private Secretary, it has been a real adventure. I know that I have been able to raise issues of concern to many residents in Darlington through these responsibilities. Perhaps most rewarding of all was the time spent on the Domestic Abuse Bill Committee – supporting the passage of this ground-breaking legislation which will improve the lives of those who have suffered from domestic abuse.

Hospital visits, time with the police, school visits, meetings with headteachers, discussions with charities and voluntary groups, sitting on the Towns Fund board, meeting with councillors, visiting our many faith and worship groups. All of these opportunities have been severely curtailed in 2020, but I look forward to doing much more face-to-face in 2021 as the vaccine rolls out.

I look forward to the future with optimism as we rebuild our economy and truly level up, I stand ready to embrace the new opportunities for Darlington which will see investment, growth and jobs. A freeport at Teesport, our agenda for new jobs in the growing green sector, the introduction of T levels, and the Kickstarter Scheme will see more opportunities for our young people. At every level of Government, myself, and my new Conservative colleagues across Teesside and County Durham have put the case for levelling up more firmly on the Government’s agenda, and I know, as we look forward to 2021 and returning back to some form of normality, we will continue to champion our region.