Labour always pitied and patronised the North to fit their narrative 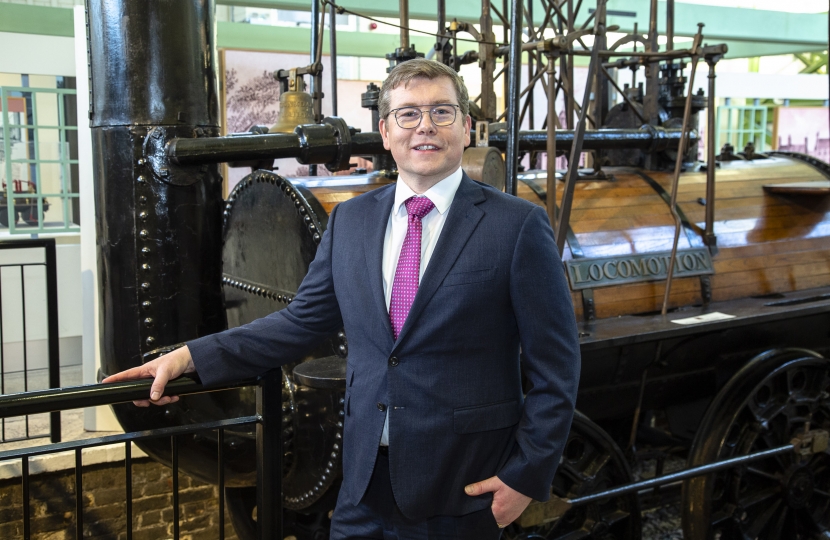 We are also home to Cleveland Bridge, who built the Sydney Harbour Bridge, parts of the Shard and also the new Wembley Arch. Cummins the engine manufacturer are based here. As too is the A1 Steam Locomotive Trust’s who built Tornado, the first main line steam locomotive built in Britain since 1960. Engineering is in our blood. Darlington has had blue, red and yellow MPs, but in more recent times has been considered a safe Labour seat. Until December 2019, that is, when I, along with a whole swathe of bright enthusiastic new “blue wall” Tories were elected to get Brexit done.

Working class, born here, raised here. Proud of our roots and ready to champion everything that is great about being from round here.

Born in Middlesbrough, and raised in Saltburn, I delivered my first Tory leaflet at the age of 11 when a family friend was standing for the council.

I have been hooked on Politics and Elections ever since. As a proud Teessider I never dared imagine that one day I might see our area turn so blue.

You could have pinned a red rosette on a donkey round here and it would win, but my belief always was that this blind following of Labour delivered nothing new for our region.

The Labour Party didn’t represent me and nor did it genuinely represent my friends, neighbours or the interests of the North East.

Far from wanting to see the North East succeed or support the aspirations of working-class families like my own, it seemed they were more interested in using the North East as a pawn in their political games.

Always talking down our region to fit their story of uncaring Conservatives.

As working class conservative (my dad was a shipwright at the Docks and my mum was a midwife in the NHS) I have always believed in our country, proud of our monarchy, proud of our armed forces, strong on law and order and always believing that if you work hard at school or in a job you can get on and better yourself.

It always seemed odd to me that for the majority of labour voters I spoke with these were their values too.

I’ve spent many thousands of hours on doorsteps across the Tees Valley having just this conversation with labour voters.

In 2019 I believe the penny finally dropped.

Yes we had the political advantage of Labour shilly shallying on Europe and the Corbyn factor, but the Conservative message – my message-  that Labour didn’t represent them was now crystal clear, and the people of Darlington, of Stoke, of Bury North, of Blyth Valley saw it too.

I am repeatedly told that these votes were “lent” to us, in so far as any vote is lent, it is cast and you have to work hard to prove to your voters that you will do right by them and with a little luck they will re-elect you.

I have been given the opportunity to fulfil a lifelong ambition of working in Parliament for the good of my constituents and for the good of the North, and like everything I have done in my life so far I will work hard and do it to the best of my ability.

The voters of Darlington can decide in 2024 whether I have earned the right to stay on or whether they want someone else.

Every day I am working on making sure that come 2024 the voters of Darlington, just as my colleagues right across the new blue wall are, have evidence of the difference a hard-working local blue MP can make to their town.

We’ve got a shorthand for it – it’s called levelling up. It means making sure that places like Darlington that have been forgotten by the Labour party, even when they were in Government, are no longer forgotten.

Spending should be better on roads and transport, better in our schools and colleges, that health improves, that the jobs market improves with more people in work with better skills and greater opportunities.

I cheered when the Chancellor announced the funding for Darlington train station expansion meaning we can get double the amount of trains through our station.

I cheered when our Tees Valley Mayor saved our Airport.

All of these plans will be proof to the people of Darlington that they have a strong local Champion proud of our town, shouting up for it in Westminster, never to be forgotten again.

The Chancellor will soon deliver a new Budget setting out the Government’s plans for the post-Covid recovery and the furthering of the levelling up agenda, I am confident that as Northern MPs (his Richmond Constituency is immediately next door to mine) we will see further commitment to the North East.

The fall of the Red Wall made the Conservative victory in 2019 possible, I will work night and day with good old fashioned northern graft at the heart of everything I do to make sure that new Blue Wall stands firm and we look upon these days as the beginning of a bright new post EU future for Darlington and whole of the North East.

- Originally published in the Daily Express -