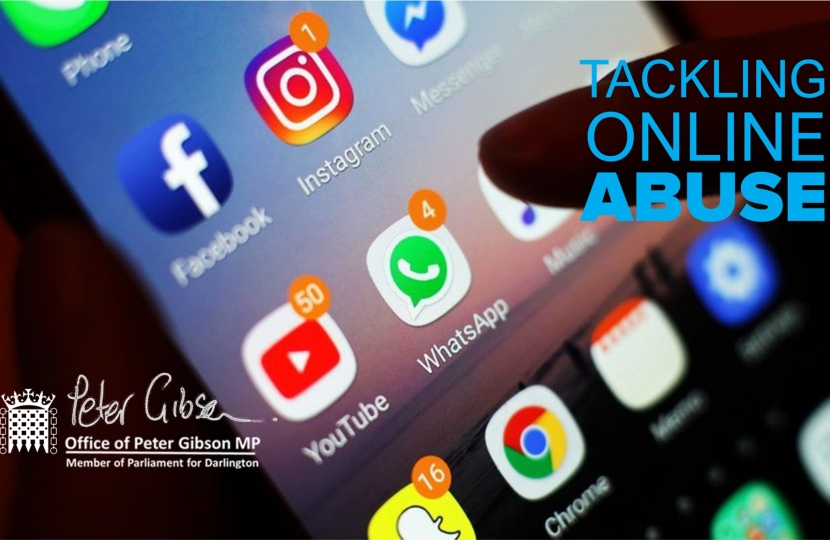 Peter Gibson MP for Darlington has written to the major social media company alongside 50 fellow Conservative MPs lobbying the tech giants to do more to tackle online abuse on their platforms.

The letter calls out the “inaction” of social media companies to stamp out abuse on their platforms and makes recommendations including ID verification, lifetime bans for repeat offenders and UK-based teams to deal with reported abuse.

The issue comes to the fore as MPs prepare for a return of the Online Safety Bill for a second reading in the House of Common. A draft of the Bill is currently being scrutinised by MPs before it is formally presented to Parliament. The urgency to act follows the collective outcry from MPs to do more to stop the regular abuse they receive online.

The letter says “The inaction by social media companies like yours to take decisive action to tackle online abuse has meant that you have become enablers of abuse which rots away the very foundations of our society.”

It continues: “Sadly, if you are in public life, whether it be as a sportsperson or a politician you are seen as “fair game”. The message it gives out to our future generations is that this is simply the cost of being thrust into the spotlight which not only damages the very fabric of our society it also undermines our democracy.

“Simply put, abuse which is not tolerated in the physical world is being allowed to fester in the online world.”

Peter Gibson MP for Darlington said “I am very pleased to put my support behind this important campaign. Social media companies must be more proactive in stamping out abuse on their platforms – they have a moral duty to ensure social media is a safe space for users.

“Unfortunately, in recent times, abuse online is becoming normalised and there is an urgent need to act now. The recommendations that we have made ensure that those who engage in abusive behaviour are held to account and I hope that these are taken seriously.”

National Highways has launched an online feedback tool for road users and those who live near to England’s motorways and major A roads to give their views on where investment is needed the most.