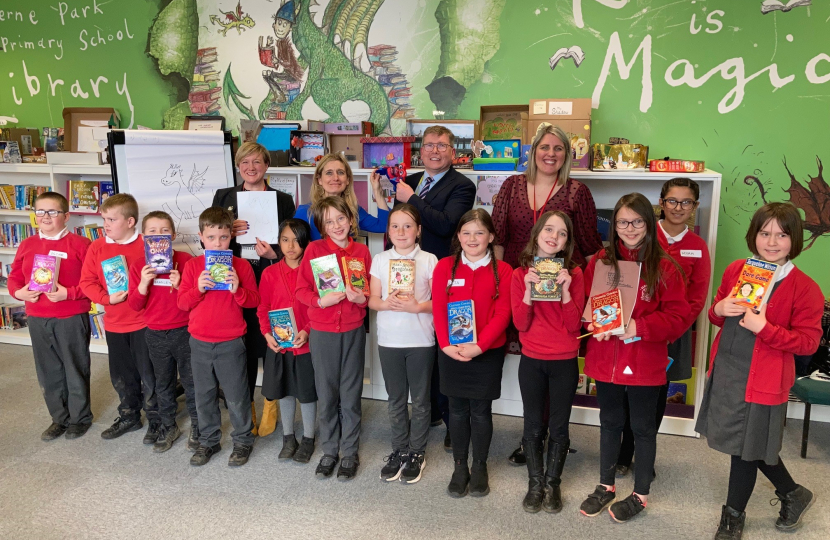 Peter Gibson MP joined Waterstone’s Children’s Laureate, Cressida Cowell – author of the best-selling How to Train Your Dragon series – to see how pupils at Skerne Park Academy, in Darlington, have reacted to the creation of the library as part of a collaboration to encourage children to read for pleasure and has pledged to support a national literacy initiative during a visit to a North-East school’s new library.

Skerne Park Academy is one of six schools around the country to have benefited from the flagship project, ‘Life-changing Libraries’, launched by Ms Cowell and BookTrust.

Mr Gibson heard about the campaign to encourage the Government to ring-fence an annual investment of £100m for schools to spend on libraries and books.

Ms Cowell told the MP: “While £300 million is ringfenced for physical education provision in schools, there is nothing set aside for libraries and books. Data shows that access to a library with more than 500 books can help counteract poverty in later life.”

She recently published an open letter – supported by a number of high-profile children’s authors and illustrators – calling for the Prime Minister to reverse the spiralling inequality in education. The letter also asked the Government to demonstrate its commitment to levelling up the country by improving primary school library provision to “help children whose future now lies in the balance”.

The initiative is supported by Reading for Pleasure UK, and its director, Catherine Millar, said: “There is a massive body of research that shows that it’s the motivation to read that improves children’s chances in life.

“It’s really wonderful seeing the children in Skerne Park invested and motivated in reading, and using really fantastic vocabulary now, in their writing and their speech. The library has really changing their lives.”

Mr Gibson pledged to sponsor a room in Parliament where the MPs from the six areas where schools have received funding to build libraries could meet to discuss the way forward.

He said: “It was fantastic to visit Skerne Park this afternoon to see the wonderful library, and I look forward to seeing this project develop nationally.”

Ms Cowell added: “It’s been so exciting to see what the school is doing with its library, and how it’s turned the whole school into readers for the joy of it. It was wonderful to meet the local MP and to hear that he’s backing the campaign. The real dream is that it might unfold nationally.”