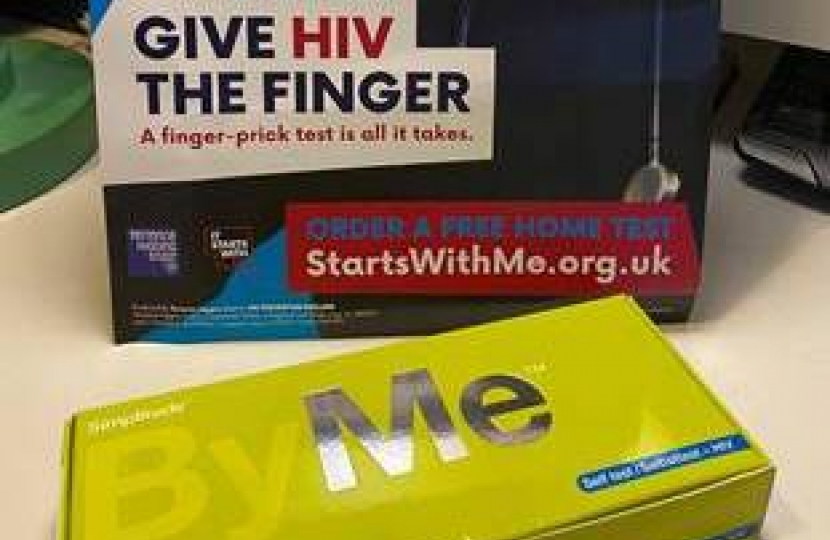 To mark National HIV Testing Week (1-7 February 2021), Darlington’s MP, Peter Gibson, is calling on local residents to test for HIV and to learn more about the virus.

This week Peter Gibson completed a Simplitude By Me HIV self-test which was ordered from the Terrence Higgins Trust and gives a result in less than 15 minutes.

Kits can be ordered here https://www.startswithme.org.uk/

During January and February anyone living in England can access a free HIV test kit to do at home provided by Public Health England. The kits arrive in a plain and discreet package, and the test involves taking a small blood sample, which is then sent away in the post with results available within a few days. The test is fast, confidential and simple. Free kits can be ordered here: https://freetesting.hiv/

In England around 6,000 people living with HIV do not know their status, with stigma often one of the biggest barriers to getting tested.

In 2019 there were 4,139 new HIV diagnoses, which was a fall of 10% compared to 2018. Over 106,000 people are living with HIV in the UK and modern medication means the vast majority of people diagnosed with HIV can expect a normal and healthy life, and cannot pass on the virus.

The UK Government has committed to ending new cases of HIV in England by 2030 and has pledged to increase HIV testing as a crucial part of achieving that aim.

Peter Gibson MP said ‘The tests can be done safely at home, and they are particularly useful given the current COVID restrictions. So much progress has been made in reducing HIV infections, but there is still more we can do. We can all play a part in helping to fight the stigma and raise awareness, I would encourage people to order a free HIV postal test’

MP Welcomes News that the Treasury is Coming to Darlington

Following the Budget announcement today Peter Gibson, Member of Parliament for Darlington, welcomed the Chancellor’s announcement that Treasury North will be coming to Darlington.