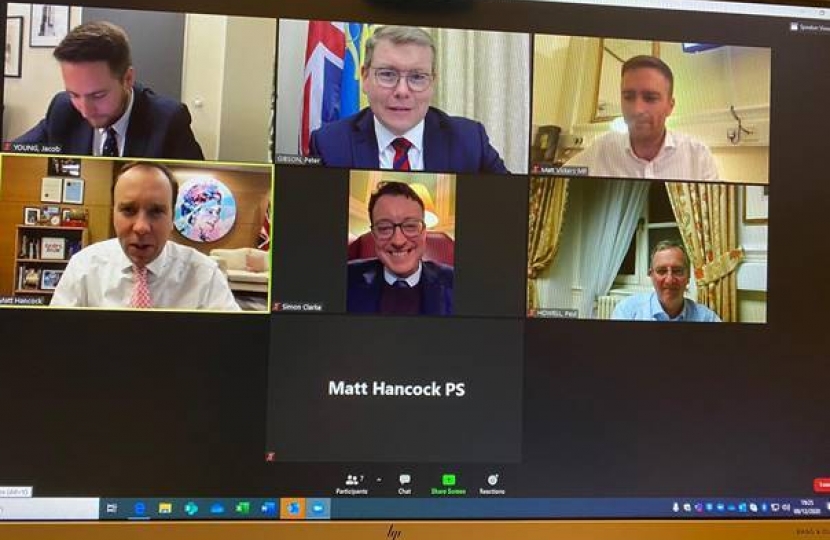 Welcoming the roll out of the vaccine across the Tees Valley yesterday, the five MPs pressed the case for the local authorities in the Tees Valley to be moved out of Tier 3 restrictions.

Positive data in falling infection rates per 100,000, and falling hospitalisations are positive signs that should be reflected in a forensic decision for the benefit of our local health and economy, although concerns remain about the over 60s infection rate.

The Health Secretary outlined that his decision will be reviewed on the 16th December based on data received up to Tuesday 14th December.

Simon Clarke, Member of Parliament for Middlesbrough South and East Cleveland, said: “The progress our region has made over the last month has been huge and is a great credit to everyone who has sacrificed so much to protect other people. With infections falling, now is the time for us to move to Tier 2. This would not mean the crisis has ended but it would send a powerful and deserved signal that the hard work of the people in the Tees Valley has been rewarded.”

Peter Gibson, Member of Parliament for Darlington, said: “The people of Darlington have made fantastic efforts to bring our infection rate down, and I know that they want to see a move of tier. I know how tough this year has been for everyone and I am hopeful for this change of tier next week.”

Paul Howell, Member of Parliament for Sedgefield, said: “The message is the same for all of the Sedgefield constituency, not just the Darlington wards. I asked the Health Secretary to make sure that he recognises the efforts people have made and the improving numbers and if they continue to improve next week to give us all every consideration for tier 2.”

Matt Vickers, Member of Parliament for Stockton South, said: "The huge fall in infection rates across our area is testament to the efforts and sacrifices made by local residents. We’ll continue to push for a move to Tier 2 which could make a real difference to the lives of individuals and the outlook for many local businesses."

Jacob Young, Member of Parliament for Redcar, said: “Across Redcar & Cleveland, we’ve worked hard to get our numbers down and people have given up so much to achieve this. We were told that if we got infections under control we could move down the tiers, and so that is now what we should do. There are concerns around the level of infections in the over 60s, however as I said in the House of Commons on the 1st Dec - provided our numbers remain comparatively low, there is no justification for keeping Redcar & Cleveland in these higher restrictions.”

Supporting the calls, Mayor of the Tees Valley, Ben Houchen said: “Our hard working local MPs have pulled together for the benefit of our area throughout this pandemic and this pressure they are applying to the Secretary of State to move us from Tier 3 to Tier 2 will be welcomed by  people right across Teesside, Darlington and Hartlepool.”

Also supporting the push for Tier 2, Councillor Heather Scott, Leader of Darlington Borough Council said, “I would urge people to continue to follow the rules to give us the best opportunity for a move to Tier 2 next week.”