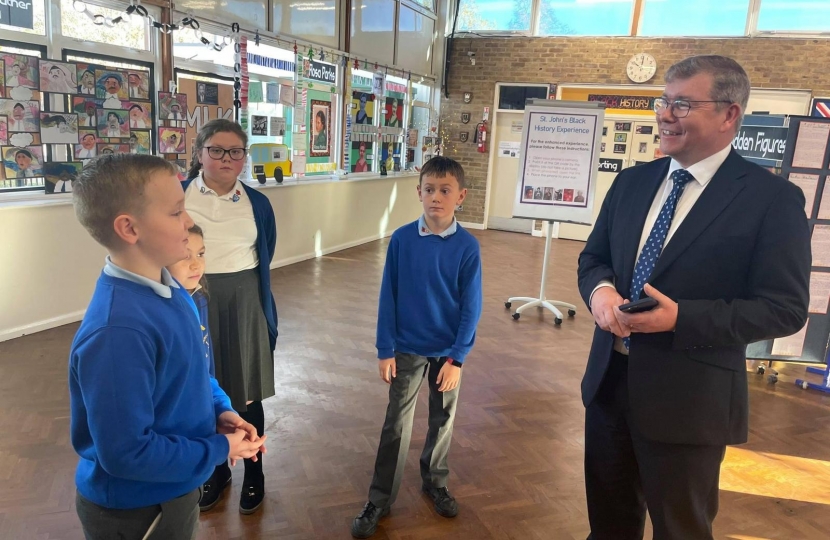 This week Peter Gibson MP invited everyone in Darlington to get involved in UK Parliament Week and join a UK-wide conversation about our democracy, people power and making change happen.

Pupils from St John’s Church of England Academy have created a fantastic interactive display in honour of Black History Month. As part of the immersive experience pupils researched facts about notable figures, such as Darlington Sportsman Arthur Wharton. The children have recorded these facts to teach others in Darlington about Black Heritage both locally and nationally.  More information can be found via http://www.stjohnsceacademy.co.uk/black-history/

Speaking about the visit and UK Parliament Week, Peter Gibson MP said “The school have put together some fantastic sound recordings on the lives of Black people and I encourage people to visit the website and listen to the stories.”

Peter then visited St Teresa’s Primary School and answered lots of questions from pupils about Parliament and what it is like to be a MP.

UK Parliament Week, this year, focuses on how small actions can lead to big changes, encouraging participants to get informed, take action and make an impact on issues they care about. It is a great opportunity to examine what issues are important to you and how you can work with UK Parliament to bring about change. Community groups, local organisations and schools in hundreds of constituencies across the United Kingdom have already signed up to be part of the conversation.

Last year, almost one million people took part in UK Parliament Week, despite the challenging circumstances caused by Covid-19. Activities were held in every nation and region of the UK, as well as countries all over the world.

Amy Baxter, Head of Education and Engagement at UK Parliament, said: “Every year we are delighted to see so many people take part in UK Parliament Week. It’s a great opportunity to get informed, take action and make an impact in Darlington and beyond. Change starts with you and UK Parliament Week is a great way to learn how you can make a difference.”

National Highways has launched an online feedback tool for road users and those who live near to England’s motorways and major A roads to give their views on where investment is needed the most.